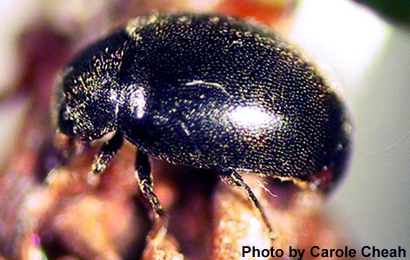 The Hemlock woolly adelgid (HWA) is a small, aphid-like insect that is covered with white, waxy wool-like material. This insect, which came from Japan in the 1950s, causes deterioration of infested trees, including loss of needles, crown thinning, and tree death.

Over the coming weeks, entomologists at the Maine Department of Agriculture, Conservation and Forestry will release more than 10,000 tiny, black lady beetles, known as Sasajiscymnus tsugae, in several hemlock woolly adelgid-infested stands in the southern region of the state.

The biological-control effort isn’t expected to eradicate the infestation, but it should reduce the HWA populations, according to Allison Kanoti, a forest entomologist.

“It is not a silver bullet, but it’s the best management tool we have in the forest at this time,” Kanoti said.

“This is a long-term solution; results will not be immediate.”

The beetles will come from labs in Pennsylvania and North Carolina. Their release is made possible by federal grants from the U.S. Department of Agriculture.

The adelgid begins its egg-laying in March. During the spring and summer there are thousands of offspring, called crawlers, crawling around, sifting down through the tree canopy and drifting on the breezes in infested hemlock forests. These young can be transferred to new locations by people, birds, and other animals. The hemlock woolly adelgid can also be moved year round on live trees.

HWA has been found in at least 19 states.