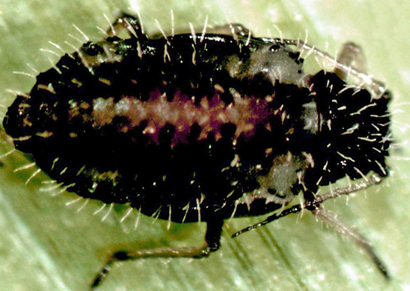 “The pest, Sipha maydis, is widely distributed in Europe, the Middle East, Asia, and parts of Africa, but in North America has previously only been intercepted in California in 2007, in a glasshouse in Georgia in 2012, and in Florida on produce from California in 2011 and 2012,” said Dr. Grasswitz.

Feeding by this aphid results in yellowing, rolling, and desiccation of leaves, which subsequently reduces yields of cereal crops.

“The aphid is also able to transmit barley yellow dwarf virus which, globally, is one of the most important and destructive diseases of small grain crops,” Dr. Grasswitz said. “This particular aphid can feed on more than 30 different species of grasses and cereal crops, including corn and sorghum, although wheat and barley are reported to be its preferred hosts.”

Sipha maydis, which has no common name at present, can spread very rapidly, especially in climatically favorable warm and dry areas.

“In Argentina, for example, it was first found in 2002 — and, in just four years, spread to cover an area that took another invasive grain aphid, Russian wheat aphid, 10 years to achieve,” Dr. Grasswitz said. “It is thought to spread readily on crops that are transported long distances for commerce, including non-host plants such as lettuce. Its discovery on a winter cover-crop of oats on an urban farm in the heart of Albuquerque tends to support this idea.”

Compared to other cereal aphids, S. maydis is relatively small, pear-shaped, and dark-brown to nearly black in color.

“Under high magnification, the body is covered with white, spine-like hairs,” Dr. Grasswitz said. “In the field, farmers should look for yellow patches around aphid colonies on affected leaves, and for the presence of ants, which are often attracted to the sugary ‘honeydew’ secreted by these aphids.”